Every 8-10 years, the technology industry used to go through a boom and bust cycle. A new technology or platform would emerge, there would be rampant investment and speculation, a few strong hypergrowth survivors would emerge and most of the rest of the new startups would collapse or get consolidated. This happened with semiconductors in the 60s & 70s, microcomputers in the 80s, and the internet in the 90s.

Each successive wave was bigger than the prior - both in terms of market cap created as well as money that flooded in. 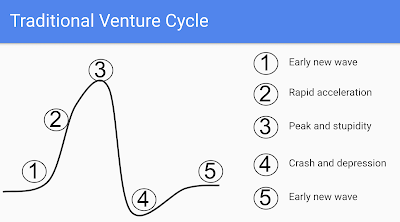 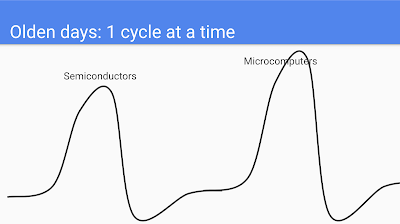 In the 2000s until now, something odd happened. The venture boom and bust cycle stopped. Things in tech have been replaced by a single long ~20 year boom. Even the financial crisis of 2007-2009 did not impact tech startup formation or growth much.

While there are undoubtedly multiple drivers for this lack of tech cyclicality [1] one potential explanation is the stacking of technology waves on top of each other. Instead of a single cycle drawn out over 8-10 years for a single new technology, we are now seeing multiple overlapping tech waves all happening on top of one another. This is both increasing the size of the overall resultant result, as well as smoothing out any down cycles.

For example, from 2005 until now we have had overlapping waves of cloud, social, mobile, SaaS, vertical SaaS, fintech, AI, and crypto. All of these would have had their own 10-year cycle in the past. One could argue we are now going through a mega-cycle ("poly-cycle"?) which may last for (at least? at most?) a few more years. Part of this cycle is dependent on capital availability and quantitative easing, but a lot of it is just software eating multiple industries simultaneously. COVID was a big driver of tech adoption as well across both consumers (Instacart, DoorDash, Amazon, etc) and enterprises (Zoom, Stripe, Figma).

One of the main characteristics of a megacycle is the lack of downturns. Instead of a sharp recession in tech leading to lots of layoffs, companies dying etc, the good times just keep rolling as wave after wave of new technology shifts overlap. This has both good and bad side effects to be discussed in a future post.

The time between these cycles has been collapsing, and the size of each cycle increasing. As each wave accelerates, it also may accelerate subsequent waves. For example the 10Xing of people online, time spent online, spend online, have all accelerated each other and their underlying technology waves. Sometimes adoption of something increases more adoption due to network or scale effects, versus slows things down (although large numbers inevitably catch up). 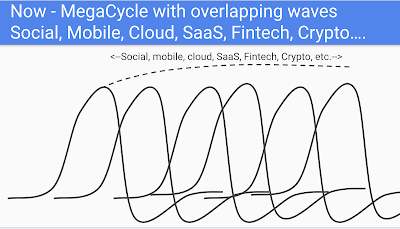 Interestingly, crypto itself has previously had much steeper cycles on roughly 4 year cycles (timed with Bitcoin halving and therefore a sudden shift in supply/demand in crypto leading to bitcoin and then alt-coin runs). The first crypto cycle was effectively the bitcoin white paper drop + initial mining. The second cycle was the emergence of Ethereum, ICOs, and new protocols & tokens. Many crypto people I know assumed that in 2021 we should have had a down cycle in crypto. 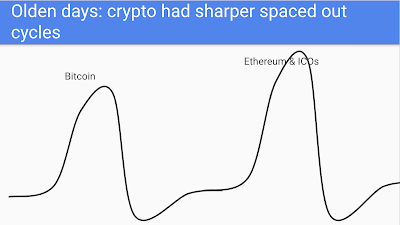 One potential explanation for a lack of downside is the massive money printing and spending being done by the US government, which is now literally just sending people cash. This creates both monetary stimulus that will inflate multiple assets, as well as potentially have investors seek crypto as an inflationary/low of dollar value hedge.

An alternative, or overlapping explanation one could argue is around overlapping crypto cycles - or a crypto mega-cycle. Just as tech had multiple overlapping waves, crypto is now seeing the same thing with multiple overlapping waves of DeFi (Uniswap, Aave, Maker, etc.), NFTs, DAOs, and the launch of multiple interesting layer 1 protocols all started a few years ago (Solana, Near, Celo, Minna, etc.). There are also an increasing number of efforts being built between crypto and traditional fiat rails, as well as broader adoption trends. Given the diversity of crypto efforts, a sudden drop and decimation in one part of the market (for example if NFTs hit a bump for some reason) may be smoothed out by a new trend or rise in another (DeFi or BTC running). In other words, parts of the market may short-term decrease their correlation a little over time as the footprint of crypto and its uses cases expands.

Some argue Crypto may also have gotten large enough in terms of usage and market cap that the extremely large fluctuations from the past may dampen a bit. Loosing 50% of a $2.4 trillion market cap is a $1.2 trillion shift - but you still have over $1 trillion of market cap left and potentially lots of buyers in the wings due to sheer scale and multiple use cases.

Sustainability of market cap may reenforce the reflexive nature of crypto. Even when crypto dropped 50% in 2021 it still had a $1 trillion+ market cap and it was clear it was not going away for good. This drives more participants ongoing into the market so there will be more buyers and users and the potential for a stronger snap back. Similarly, great talent may continue to enter the market in the absence of a sharp dip. In 2000-2001, there we mass layoffs in technology and many people who left tech did not come back. In 2017 talent into crypto slowed as the downcycle hit. Currently the better sustainability of crypto market cap means more tech and new grad talent continues to come into crypto which should help push the next innovation waves in the market. 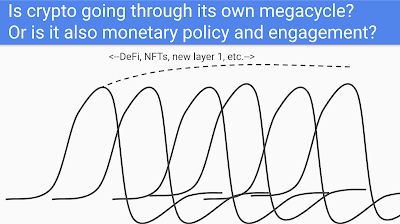 It will be interesting to watch the coming year as to whether crypto goes back into cyclical behavior with a sharper downturn soon, or if we are now caught in a megacycle.

The big confounder on this all is ongoing mass scale government money printing and spending. Given ongoing supply chain and energy issues and pricing rising in various industries, more people seem worried about the chances for transitory or prolonged inflation or "stagflation"[2]. Bitcoin was started in part as a reaction to the great financial crisis and US monetary policy. One could argue the early origins of cryptocurrencies was to hedge the exact environment we now find ourselves in[3].

Thanks to Matt Huang, Fred Ehrsam, and Curtis Spencer for comments on this post.

[1] For example, one aspect or cause of the boom may be explained by a few things including the ongoing need for capital to find a high return / high growth home due to low to no interest rates caused by quantitative easing. So a lot more money has flown into tech over time due to a lack of yield anywhere else.

[2] Stagflation is when there is rising inflation - so companies need to pass on higher pricing to cushion margins. However those higher prices result in demand destruction and a stagnant economy.

[3] So "hedge US macro" may be sufficient cause for a flight to crypto right now and the quick rebound from a down cycle.