The rise of Facebook and Twitter led many people in 2006-2008 to start or fund multiple social product companies. Many of the entrepreneurs and investors who went all in on social have since shied away from this market.

However, a survey of the big winners suggests the pace at which large social networks emerge has not slowed down.  Although it is hard to reproduce a success the size of Facebook, many billion dollar social companies have been started more recently.  Below is a chart of major products versus the year they launched [1,2]. 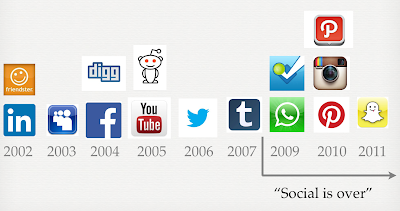 Once you remove products that never reached traffic on the scale of the top ~50 or so sites based on Alexa[3] you end up with:

Just as the calls came that "social is dead", a wave of major services launched.  WhatsApp, Foursquare, Pinterest, Instagram, and Snapchat launched 2009 or later.  A number of vertical social networks also launched including NextDoor (2011), ClassDojo (2012), and EdModo (2008).

2009-2011 Mobile Social Emerged
While it is unclear if all the newer companies listed above will be successful, it is striking that so many new social networks have hit scale since 2009.  Obviously, the internet is a much bigger place than it was 10 years ago so scale can come faster.

The rise of mobile as a new platform has yielded a whole new set of social products (5 of the 6 companies listed since 2009 are mobile-first products).  The ubiquity of smart phones has also opened up more time of the day for people to spend time online in short bursts - the perfect behavior for a social product or game.  Finally, many young users don't want to use the same social networks their parents inevitably join once it gets large enough.

It is interesting to speculate if Google Glass or other new platforms will yield new social products tailored to new hardware experiences.

2008-2012 Specialized Social Experiences
Just as LinkedIn (launch 2002) pioneered business social products a new slew of vertical networks have emerged including NextDoor (launch 2011), ClassDojo (2012), and EdModo (launch 2008).  In general, the vertical networks take longer to grow, but in many cases monetize more directly for a subset of users then broad based consumer sites (see e.g. LinkedIn).

Death Of Social Products
Over time, a number of social products that have hit scale have died (e.g. Friendster, Digg, and Myspace).  Typically social products can only die due to self-inflicted wounds once they have traction.  I would not be surprised if 1-2 of the companies I listed since 2009 will also eventually be subsumed.

Why Have Early Stage Investors and Entrepreneurs Fled Social?
Scar Tissue.  Many investors wrote a large number of checks to early stage consumer products only to watch most or all of them fail.  It is hard to spot a good social product before it has traction, when it is still cheap to invest.  Withdrawing from the market is a rational response to not being able to call whether a product will work or not.

On the entrepreneurial side, most entrepreneurs who tried to build social products have largely failed as well.  It is hard to predict what service will resonate with consumer until you launch it.  Many of these entrepreneurs are now working in other markets.

Allure of the new.  The same investors who scorned hardware 18 months ago are now suddenly talking about how much they love drones.  Silicon Valley works in waves of trends, some of which are legitimate and some less so (e.g. the "nanotech" wave of the early-mid 2000s).  The big trends today include hardware, bitcoin, health, and education.  Some of these trends will prove out to be healthy places to spend time.  In other cases the new trends will be dead ends.

Thinking it is game over.  Many people believe Facebook and Twitter have won the social wars and no additional major companies will emerge.  A common refrain is there isn't any room for consumers to spend more time on social.  Given how rapidly behavior changes (especially among younger users), the growth of "mobile time", and the seemingly infinite capacity for people to poke each other online, I am skeptical of this argument.  Older users typically follow younger users onto social products, and younger users have a lot more room for experimentation.

I would not be surprised if this pace of innovation continues for the next few years, with a new major social property launching every year or so.

Thanks to David King for many of the conversations that sparked this post[4].

Notes
[1] I have purposefully avoided listing companies that have a "social" component (e.g. Yelp, Waze, etc.) but are not primarily some form of content posting or status message service.
[2] I did not list launch dates for e.g. Chinese (Sina Weibo, RenRen, Tencent Weibo and WeChat) and Korean (Line) social products as I am less familiar with them.
[3] I kept Snapchat and WhatsApp in the list as I believe they are converging on traffic on the scale of an Alexa50 site, but it is hard to measure mobile messaging traffic.
[4] AFAIK I am probably ripping off a number of his ideas.