Markets Are 10X Bigger Than Ever

Over the last few years the number of people and businesses online has ballooned. Spend on the Internet has grown rapidly as you can now reach billions of people, and hundreds of millions of businesses, in a frictionless way. While in the late 1990s people were scared to put their credit card number into a website, today people use their phones to pay grocery stores and order Ubers. Growth of the internet has spilled over to all classes of software including enterprise SaaS and SMB segments.

This in turn has yielded much larger outcomes than anyone expected for online software companies. The large IPOs of the last year, and the ongoing growth and scaling of prior generation SaaS companies, reflects massive growth and scale of the internet and its usage.

Market caps of some SaaS companies:

In general, software markets and businesses are 10X bigger than they were 10-15 years ago. This is due to the liquidity provided by the global internet. A company that would have been a $10-$20M subscale revenue business is now a $100M revenue company, which means many more companies can now be worth $1B or more, and many more SaaS businesses have the potential to be $10B+.

This post reviews some of the numbers showing how much larger the internet is now than it used to be, then the implications for startups and their eventual market caps, and geographic distribution.

1. Markets Are Bigger Than Ever In The History Of Humanity.
The images below are all taken from the Internet Trends slides from 2017 and 2018.

Point 1: There are now >3.5 billion people online. This means businesses can reach more customers than ever before via a single channel (literally billions of them!). 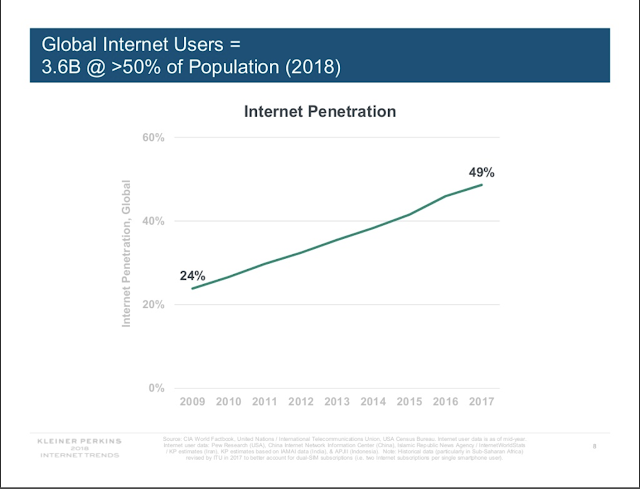 Point 2: Almost 3 billion people have smartphones. So people are not only online, but always connected. This make communications applications and products part of day-to-day use, and has also created enterprise pull for related products (Slack, Zoom). 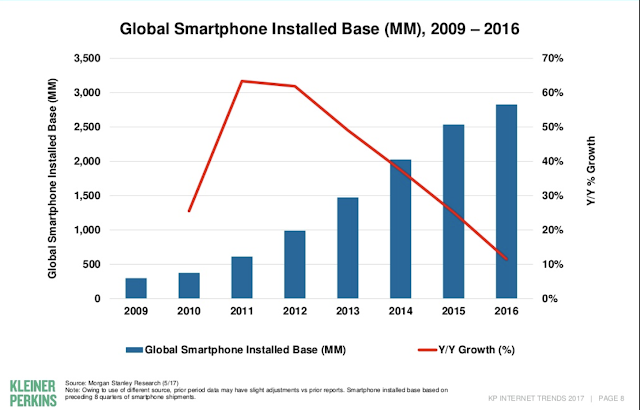 Point 3: WiFi is everywhere. It is now standard for people and businesses to always be connected. 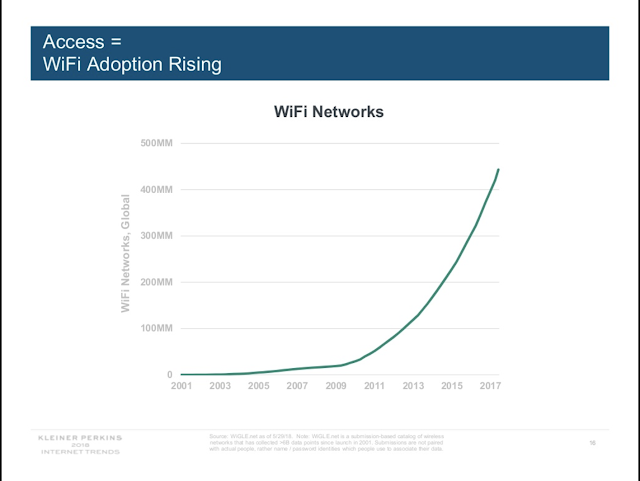 Point 4: People spend so much time online, they expect to do the same for both their personal, and business applications. More people online + always online = more internet customers and bigger than ever services. 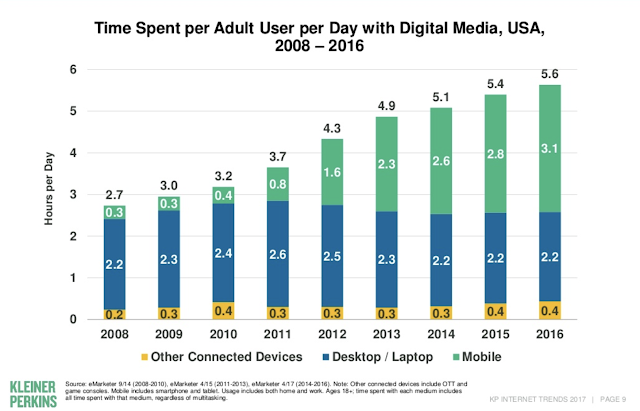 Point 5: People spend money where they spend their time. So more money has also flowed online over the last 10 years at a massive rate. 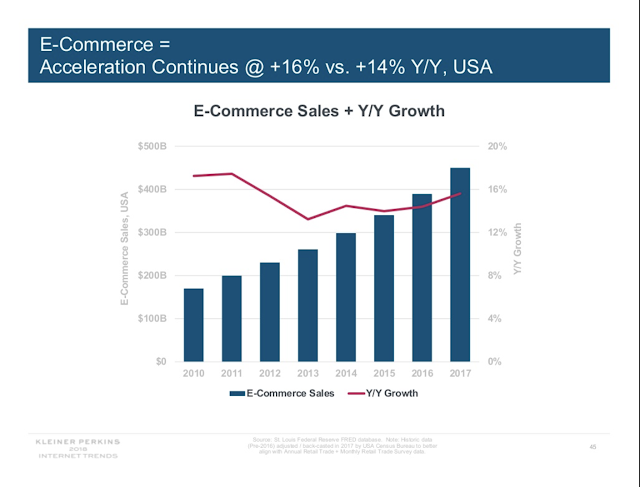 Point 6. Online services can grow at a massive rate due to the global market access of the internet. Below is an image of Zoom meeting minutes per year. 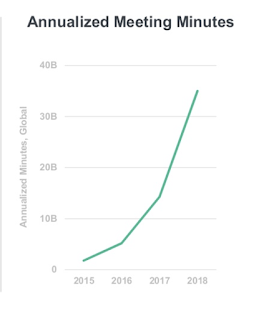 2. Since online markets are bigger than ever, more $1B to $10B software companies can exist.
A big side effect of humanity-scale adoption of the Internet is that businesses can get bigger, faster, then ever before with the internet as the catalyst. Never before have so many people been so accessible in a low cost, low friction manner. This means startups and products can be adopted faster than ever.

The old standard for a software as a services (SaaS) company to go public was $100M in annual recurring revenue, which would imply a $1 billion market cap assuming a reasonable ongoing growth rate.

a. There will be more $1B to $10B+ software companies.
In the past, many niche software companies would tap out at $20M to $50M in revenue. Since markets online are 5-10X bigger than they used be, these same companies will now scale to $100M+ in revenue and a $1B+ market cap. Companies that in the past would have been a $1B market cap company, are suddenly supporting $10B to $20B market caps per the current slate of IPOs.

This does not mean there will be more outliers worth $100 billion or more, but rather that the base revenue a random company can achieve is a few fold higher than just a few years ago due to the growth and liquidity of the Internet.

This will be confused in popular press and media as "you can start a tech company anywhere" (true) and "Silicon Valley is over" (false). While you can start a $1B+ company most places due to the recent mega scale of the internet, it does not negate the network effect that a tech cluster, or industry town like Silicon Valley has (more on this in a future blog post). The true outlier $10B to $100B+ companies will continue to be started in tech clusters like the (San Francisco) Bay Area, Bangalore, and Beijing (the "3 Bs of tech").

3. Startup Companies Will Grow Faster Than Ever
The growth rate of a company is really just a reflection of its market size and ability to scale its go-to-market. In other words, how many people can I reach in a repeatable fashion? Given the scale and liqudity of reaching people online, and their willingness to buy good and services via the web, companies can now grow to massive scale faster than ever. Not only will companies be bigger than ever, they can get there faster.

Slack is a good example of rapid ramp by a SaaS company. "Bottoms up" distribution, where any employee with a credit card can buy a SaaS service will also accelerate new SaaS adoption. 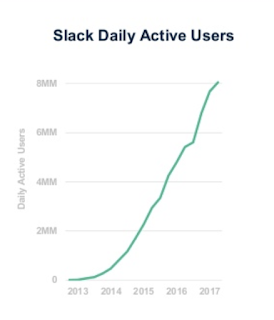 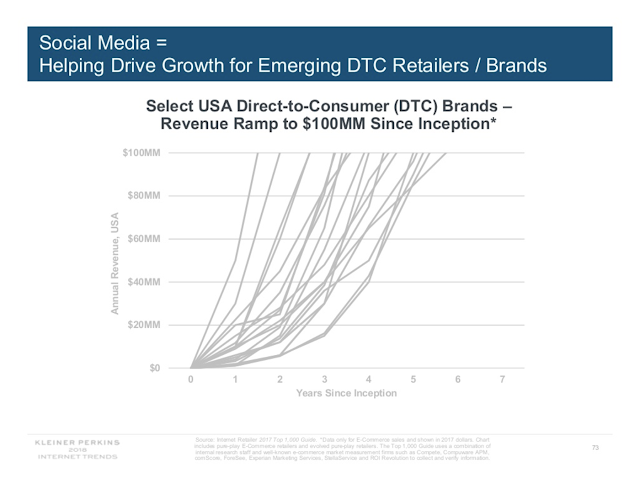 3. There Is Still A Lot Of Room To Grow 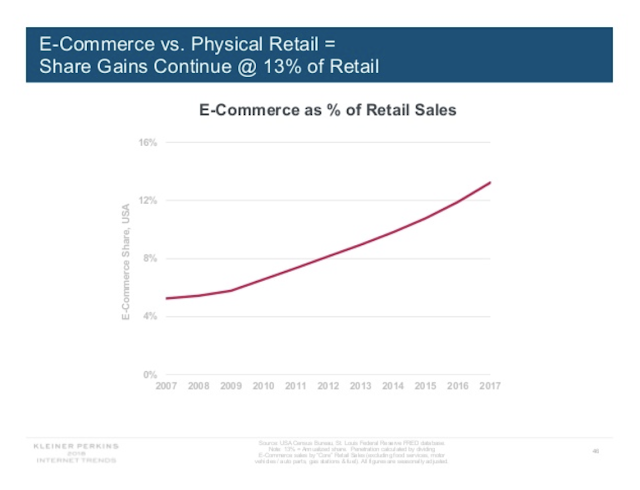 Ecommerce as a category has grown from ~5% to 13% of retail sales since 2007. While not all commerce will move online, there is still massive tailwinds to the Internet.

Summary
The last 2 decades have seen the shift of behavior online + commerce online. The next 2 decades will see a further shift in buying behavior and expansion of the Internet as the motive source for startup expansion. In other words, startup companies will continue to grow in scale, and get there even faster. Markets are bigger and faster than ever before.

MY BOOK
You can order the High Growth Handbook here.