In the crypto world, Bitcoin is perceived as slow to change, clunky technologically, and as having bad governance. While all these things may be true, Bitcoin has strong network effects that will maintain its status as the primary value store in the short to medium term. It is always possible Ethereum or another newer protocol will take over the value store use case in 5 to 10 years, but network effects decrease its likelihood in the short term.

1. User, fund and investor adoption. Bitcoin has the largest user base adoption, as reflected in its market cap. With millions of people now holding bitcoin, there is incentive for a large sub population to spread adoption. Additionally, large institutional holders have started to buy bitcoin and stand alone funds like GBTC have reached $1 billion in market cap holding bitcoin alone.

2. Exchange adoption & network liquidity: Bitcoin as the "reserve currency". Bitcoin is listed by all the major exchanges, which in concert with its large userbase creates large scale market liquidity. This liquidity has caused additional large institutional investor to dip their toes into the crypto waters buy buying in and accelerating further liquidity.

Indeed, bitcoin along with fiat is the reserve currency of the crypto world. Prices on exchanges are often denominated in bitcoin. Bitcoin trades into other coin volume is the second highest after fiat. 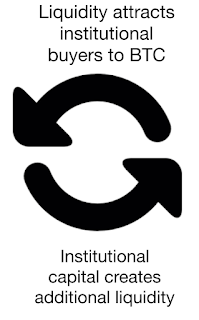 3. Derivatives and other financial infrastructure. Once liquidity starts to be achieved in an asset class entrepreneurs start to build infrastructure to support it. Bitcoin is the first cryptocurrency to have derivatives, custody solutions, and vaults. These incremental solutions like derivatives will accelerate adoption by additional large scale financial buyers, pushing the network effect forward.

Obviously, other cryptocurrencies will (or already) have financial infrastructure extended from bitcoin to them. However, the first mover effect by bitcoin will increase its market cap and liquidity further.

4. Mainstream press and attention. Bitcoins large userbase, fund investment, ongoing market cap increase, and financial infrastructure build out all contribute to ongoing press. Press coverage in turn feeds back to increase the user base and fund participation of bitcoin. In popular culture, bitcoin is now more or less synonymous with cryptocurrencies. 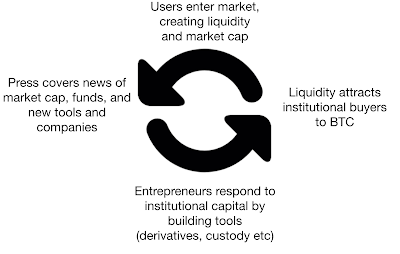 Reflexive Assets and Network Effects
Fundamentally, value stores like bitcoin and gold are reflexive assets - assets whose value grows because others value them. Store of Value is the ultimate coordination game and for reflexive assets, price itself is a network effect. As the virtuous cycle outlined above kicks in, the reflexivity of bitcoin accelerates its value. See Soros on reflexivity here.

Forks as Dividends
Because of bitcoin's dominant position, over ten forks are planned next year for bitcoin. Barring a civil war in the bitcoin community, these are perceived by the investor community effectively as dividends. Bitcoin's market dominance makes it a juicy target for airdrops, reenforcing its dominance with investor.

Is The Slow Change Of Bitcoin A Feature or a Bug?
One knock on bitcoin is the slow pace of iteration and technology advancement in its community. The argument made is that new forms of innovation will cause migration off of bitcoin to another blockchain for the value store use case. For example, privacy features provided by zk-SNARKs or STARKs, increased network scalability, or lower transaction fees should all drive people off of bitcoin to ethereum or some still to be defined protocol.

The central value store case (buy and hold) is a simple one. Privacy features are valuable for specific applications, and low fees make a big difference for specific use cases. For example, a payment network would need to be high scale and low cost. However, for the value store use case one can argue little additional innovation is needed for bitcoin outside of "don't fall over on performance and don't have a civil war". Stability is a good thing when a lot of your money is tied up in something. Bitcoin perhaps should be more like C++ avionics software than a javascript social media app. "Measure twice cut once" vs "move fast and break things"[2].

Bitcoin Failure Modes
Given the network effects above, bitcoin is likely to fail for one or more of the following reasons:
(i) Network degradation due to bad software performance or fees. Given the slow pace of innovation in bitcoin its performance may suffer as it scales and eventually become so bad another coin takes over. Similarly fees may grow too large.

(ii) Attacks via internal civil war or external government action. The much anticipated Segwit2X fork failed to materialize in November. However, the doomsday scenario in bitcoin is a war between developers and miners with coordinated attacks on bitcoin infrastructure on one side of a fork or another. Similarly, a government actor could try to attack bitcoin nodes rendering the network ineffective.

Government attacks could come as regulatory action, cyberattack, or adding sufficient hash power to take over the protocol (for example if China nationalized its bitcoin miners).

(iii) Dilution of what "Bitcoin" means. With each subsequent fork the branding of bitcoin becomes more confusing. In a world of Bitcoin Cash, Bitcoin Gold, Bitcoin Diamond, Bitcoin Zero which is the real bitcoin? What if hash power gets diluted down with each fork as a subset switches over to mine the new coin?

(iv) Mining power centralization. Mining power continues to be concentrated in the hands of a small number of actors. If mining blocks surpass 50% of the bitcoin network a miner can abuse its position in the network. The extreme example would be a state actor taking control of the bitcoin network and seizing or freezing assets. A less extreme example would be a large mining company abusing its position to censor or modify the blockchain for its own gain. This may actually be the biggest threat to bitcoin in the medium term.

(v) Unkowns. Given how early we are in the evolution of this technology and market, there is still a lot of that could go wrong that we have not anticipated.

Unless one of the above happen, bitcoin should continue to thrive in the short term as the primary store of value in the crypto world. Twitter survived literal years of fail whale, and bitcoin can survive some rough patches of its own. In the long run, it is possible technological innovation by a new chain may allow bitcoin to be surpassed, but networks effects are tough to overcome.

What Would A Post-Bitcoin World Look Like?
While I do not believe bitcoin will be replaced for value store in short run, some possible candidates to displace bitcoin would be:

(i) A derivative of bitcoin. The most likely replacement for bitcoin as value store would be a fork of bitcoin. By airdropping the new chain to all bitcoin holders, a bitcoin fork may fix performance and governance in bitcoin while keeping its network effects. The best way to participate in a future fork of bitcoin is to hold bitcoin today.

(ii) Ethereum. Ethereum has enormous developer interest and the second largest market cap. It also has characteristics that could make it a good payment network. At a minimum, ethereum is a likely "silver" to bitcoin's "gold" status. There are some scenarios where bitcoin collapses and ethereum takes over as primary value store.

(iii) Privacy tokens. Zcash and Monero have additional features for privacy and anonymity that bitcoin lacks. For some use cases this is an attractive feature. Some approaches like Bulletproofs may allow for anonymous transactions that are still auditable for tax and other business purposes-which are likely needed for mainstream adoption.

(iv) Stable coin. For payments you want stability in your currency. For value store, you want appreciation but may be happy with inflation-adjusted stability. Stable coin projects like Basecoin are working to create tokens whose price has minimized volatility.

(v) Parachain. Parachains such as Cosmos or Polkadot allow for cross chain transactions. If it is easy to move between bitcoin, ethereum, and other blockchains, each individual blockchain may cede value to the parachain.

(vi) Something that does not exist yet. The world changes fast.

Just as in the world of atoms there is gold, silver, and platinum - in the digital world there is likely to be more then one value store (although one will be dominant). As such, I am bullish on more then one token aggregating ongoing value in the coming years with bitcoin being the primary.

Thanks to Lucas Ryan, Matt Huang, Fred Ehrsam, Avichal Garg for comments on this post.

NOTES
[1] Infrastructure extends beyond financial derivatives and other products I mentioned. Bitcoin miners have custom ASICs to mine bitcoin that will not be as performant on other hash functions. This creates some stickiness to bitcoin mining, although given hardware turnover cycles it is not a long term effect of importance.

[2] The last two lines were taken verbatim from Matt Huang. I did not think I could state it better.

RELATED POSTS
Cryptocurrency Incentives and Corporate Structures
Big Banks and Blockchains
Cryptocurrency's Netscape Moment
End of Cycle?
Its M&A Time!
Market Caps and the 2% Rule
Machine Learning Startups
3 Types Of Platform Companies
Defensibility and Lock-In: Uber and Lyft
Uber And Disruption
Who Cares If Its Been Tried Before?
The Road To $5 Billion Is A Long One
How To Win As Second Mover
End Of Silicon Valley
Social Products
Hot Markets For 2015
Waiting Too Long To Go Public
What Is Your Startup Acquisition Really Worth?
5 Reasons To Sell Your Startup
M&A Ladder
Posted by Elad Gil at 10:49 AM