Series A Crunch: Why Fewer Companies Are Successfully Raising Series A Rounds

Update:  Data from TechCrunch supports the post below.  CrunchBase has seen a 33% increase in the number of seeds reported and a 9.6% drop in the number of series A's reported.   In 2008 the ratio of seeds/series A reported were 1:1, in 2011 the ratio was ~2:1
--------------------------
One big shift in the startup scene over the last 18 months is the sheer volume of startups getting started and seed funded.  If we use Y-Combinator as a proxy for the broader ecosystem (which is probably directionally correct, although YC growth may be overall higher due to increased branding as well as e.g. Start Fund and other activities) then we see the following: 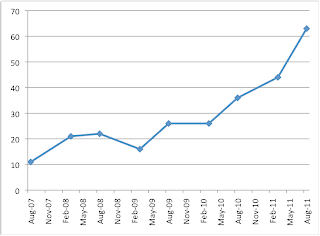 GRAPH OF # OF YC COMPANIES PER BATCH*

At the same time, the percentage of startups closing seed rounds seems reasonably static to me (it may even be up).  This means there are many more companies getting founded and then funded at the seed round.  However, the number of legitimate VCs doing series A rounds has not increased.

This has led to a crunch at the series A level, where more and more startups are unable to successfully raise a series A.

Reasons for the Series A Crunch
1. The bar has gone up significantly for what constitutes a company that can raise series A.  This is due in part to valuations going up (so series A are now often $5-10 million raises instead of $3-7 million) but I think it is largely due to the large supply of startups.

All the VCs I know tell me times are getting more and more busy for them.  They are seeing way more series A deals coming through their doors, but they are funding the same number of deals.  This means fewer startups are successfully closing A rounds.  Those startups that do close round are often further along then the average series A company was 2-3 years ago.

Return of the Bridge Rounds
So what do all these startups do that can not raise a series A?  A subset sell as a team buy, a few go out of business, but an increasing number are going out for a bridge round.  Basically, instead of raising $5 million, I am seeing post-seed startups raise anywhere from $500K to $1.5 millon, at a valuation somewhere between a series A and a seed valuation, with the hope that the additional capital will give them time to gain more traction or scale their business.

Q1 and Q2 of 2012 Will Likely Be Very Competitive For Series A
Many companies who raised a bridge round plan to go raise a series A sometime next year.  Unfortunately, the environment may get even more competitive at that time.  Given the ramp in new startups in early to mid 2011, Q1 and Q2 of 2012 may be even more competitive.  You will not only have the startups seed funded in 2011 raising a round, but also all the startups from 2010 who raised bridge rounds - all competing for the same dollars.

If you add in the risk of a European financial crisis, then early next year may be a tough time indeed to raise a round if you are in the "middling" zone of traction (versus those that will flame out or be team buys).  In contrast, companies with great traction, or a well connected celebrity entrepreneur, will still get chased by all the various VCs as usual.

Some Tips For Raising a Bridge Round
Given the likely high competition for series A dollars in early 2012, if you plan to raise a bridge round I would suggest:
1. Raise enough money to buy you real runway.  Make sure you have the runway to hit the milestones needed to raise a series A.  It will be harder to raise another bridge, and it is always easiest to raise money all at once then have to go out fundraising again 6 months later.  If you think you need $500K, think about raising $750K or $1 million to have extra runway in case it is needed.

2. Diversify your investors.
Adding new investors to the mix may both up the valuation you get for the bridge, as well as expand your network for the series A.

Other fundraising related blogs:
Questions VCs Will Ask You
How To Raise A Successful VC Round
Differences Between Funding Rounds: Series Seed, A, B, C...
Financing Approaches Most Likely To Kill Your Company
Put Your Investors To Work For You
Party Rounds: How to Get A High Valuation For Your Seed Startup
20 Questions To Ask Yourself Before Raising Money
VC Economics: Why VCs Could Care Less About Your $50 Million Exit
The 7 Types Of Angel Investors