In 2019 I wrote about how "industry towns" emerge in every market. These clusters of people, ideas, capital, service providers, and companies tend to have strong network effects that support startup formation and success in a given industry. 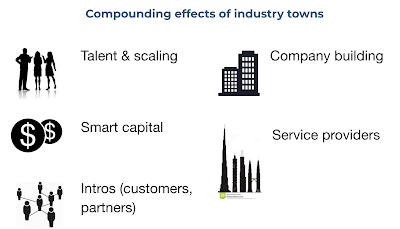 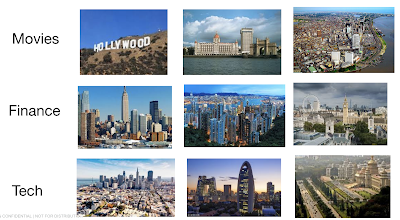 Given all the IPOs in the last 16 months (including Snowflake, Unity, Asana, Palantir) and the sharp decrease in market cap in some companies (WeWork), I thought it would be interesting to update the view of where unicorn market cap currently resides.
Some big caveats include (1) Unicorn market cap is a lagging indicator of ecosystem health since many companies take anywhere from 2-7 years to be worth their first billion (2) COVID and the move to more remote work or "remote first" startups may impact what this looks like in 4-5 years (3) San Francisco governance may decrease San Francisco's long term relevance, although the broader Bay Area should be strong longer term. A big thanks to the talented Shin Kim for pulling & structuring the data below (raw data here if you want it).
Unicorn Turnover
Since June 2019, 37 of the 361 Unicorns at the time went public, 14 were acquired, and 8 did down rounds or shuttered. 187 new unicorns emerged in the last 15 months (>3 a week!) which means 38% of total unicorns today are new ones (and the number of unicorns grew 58% in 15 months!). 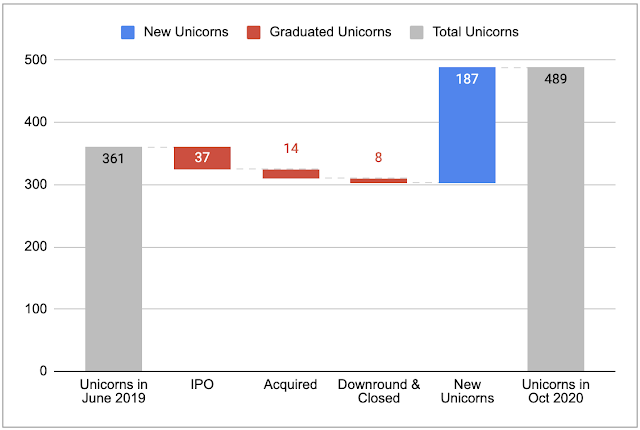 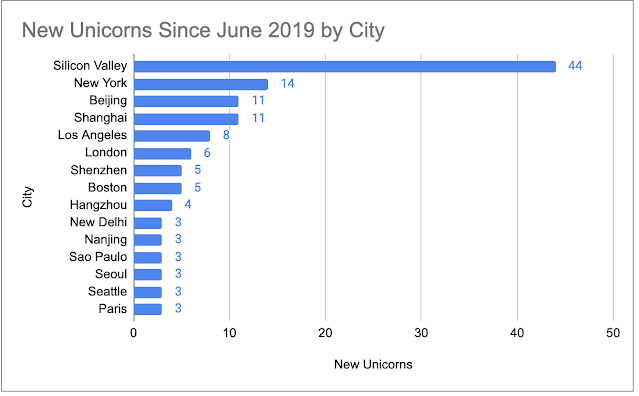 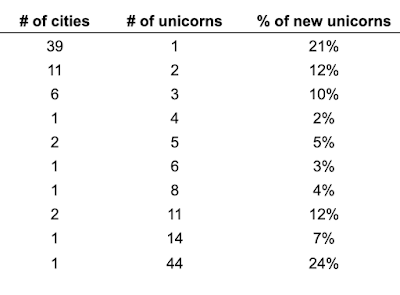 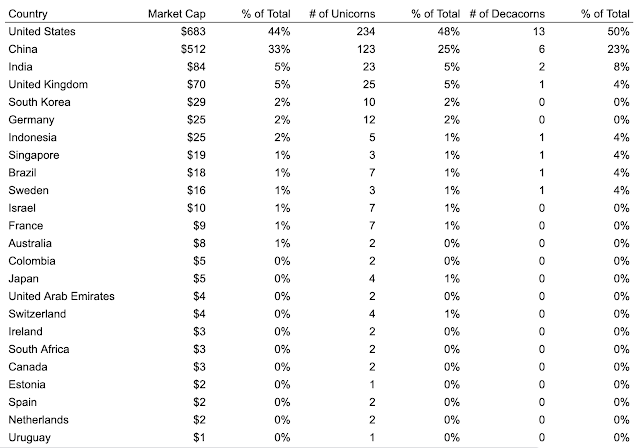 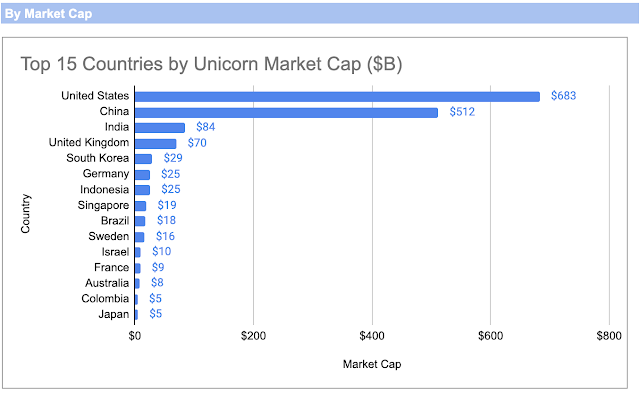 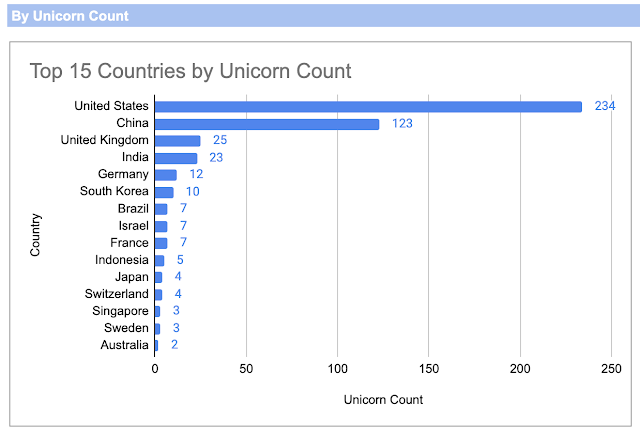 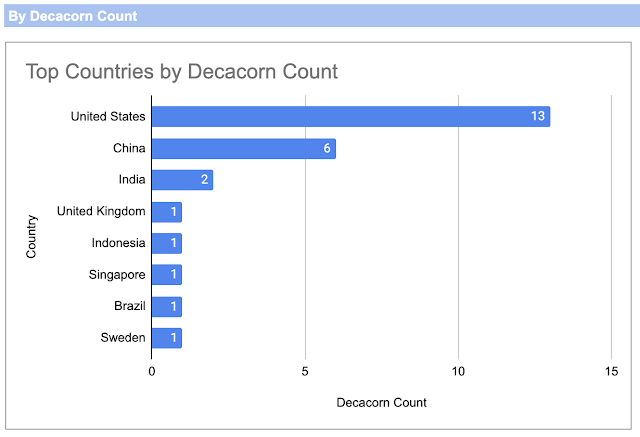 Decacorns, or companies with $10B or more in market cap, are similarly concentrated in the USA and China representing 19 out of 26 total global decacorns.
In-country concentration
Just as unicorn market cap and number are concentrated by country globally, each country also has its regional tech clusters or industry towns. 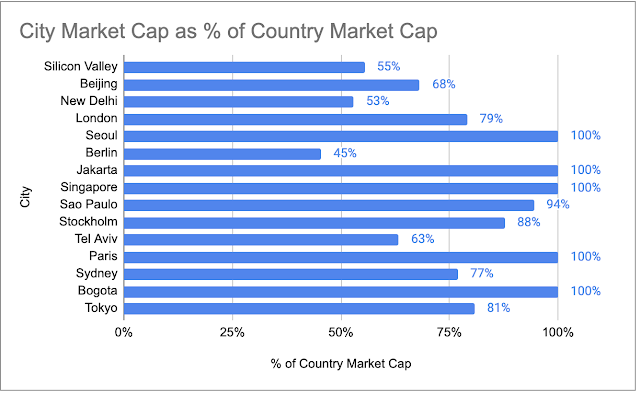 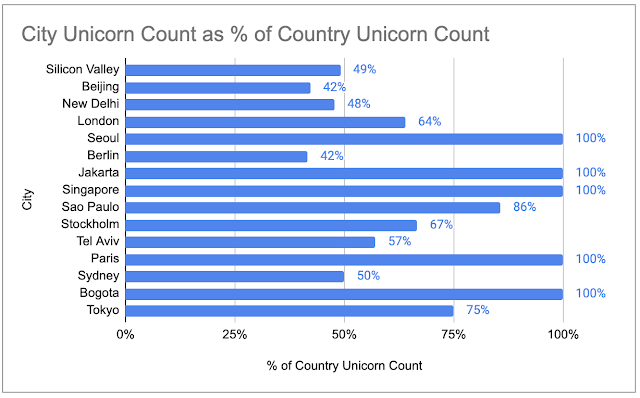 In every country surveyed almost half or more of all unicorn market cap, and number, resided in a single city or major metro area. 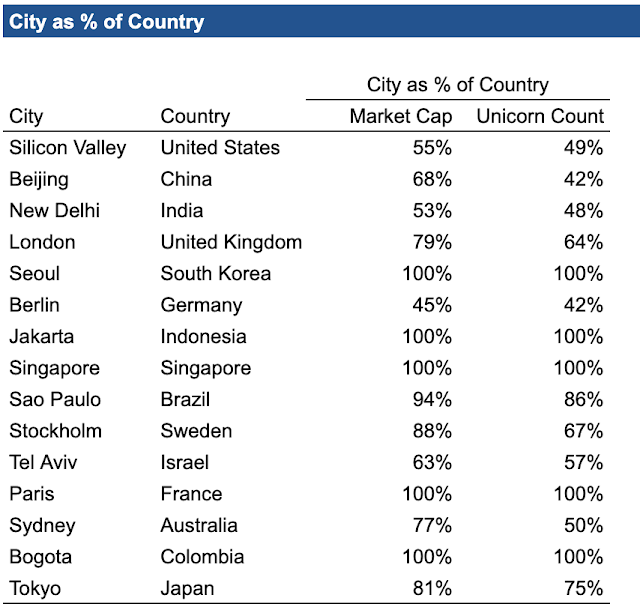 Unicorns in the USA 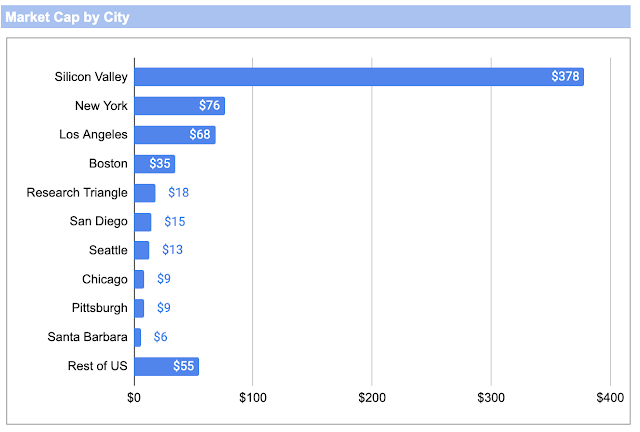 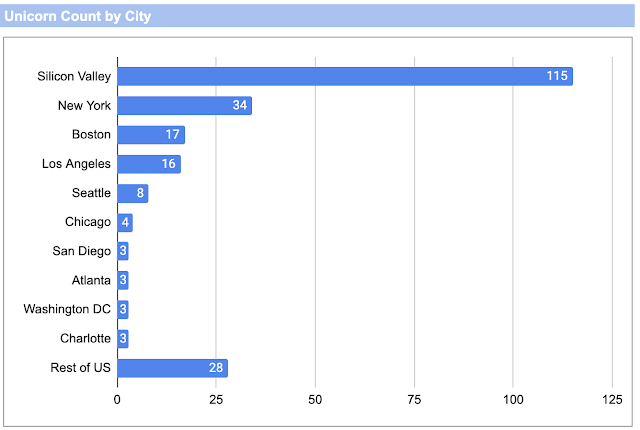 Next tech cluster in the USA
Intriguingly, a number of the cities often spoken about as the "next tech cluster" have not added much by way of unicorns. Austin has 2 total and Portland has 1. One can argue that this is simply a time lag and in 3-4 years many unicorns will have sprouted locally. Anecdotally, the cities that seem have a number of high quality founders and new companies - and therefore may be on their way to growing more unicorns include Denver and Salt Lake City. While I see many investors move to Austin, I see more founders move to Denver. Time will tell.
China Unicorns
In China, Beijing is 7X the size of Shanghai by market cap but only 2X by unicorn number. This is driven largely by ByteDance and Didi. Subtracting these two companies off yields only a 3X in market cap difference between Shanghai and Beijing. It is notable that both Beijing and Shanghai added 11 unicorns in the last 15 months. So new Unicorn growth is more neck and neck more recently. 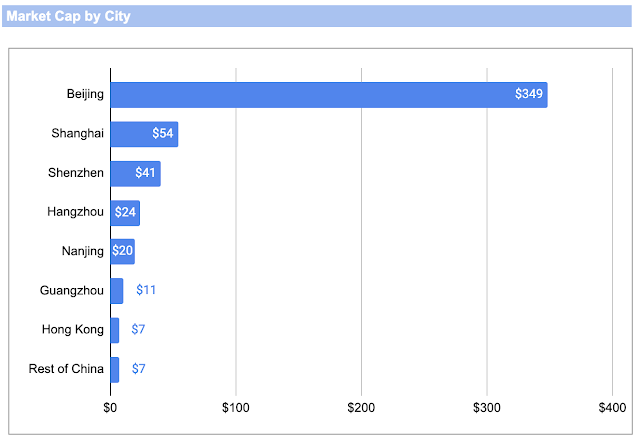 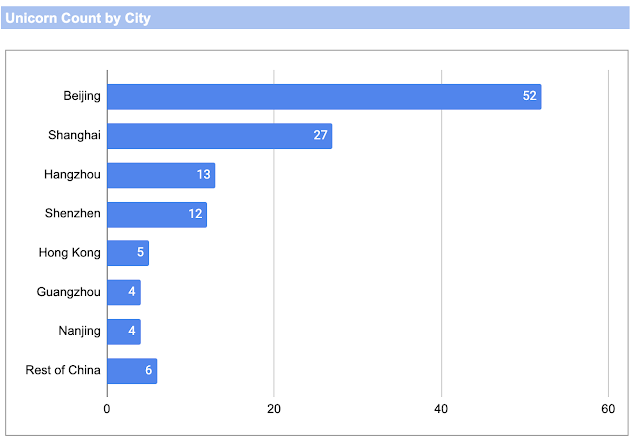 India Unicorns
India presents an interesting case study in a second cluster forming. When I visited India in 2007, Bangalore was the clear engineering center and tech startup leader. Hyderabad was a strong tech customer support center. Since that time New Delhi as emerged as a major tech cluster and startup unicorn hub. While Bangalore continues to thrive, some point to bad governance locally (traffic, high rents, passive government) as one of the reasons it is not the only center. There are undoubtedly other reasons, but it is worth thinking about relative to San Francisco longer term. 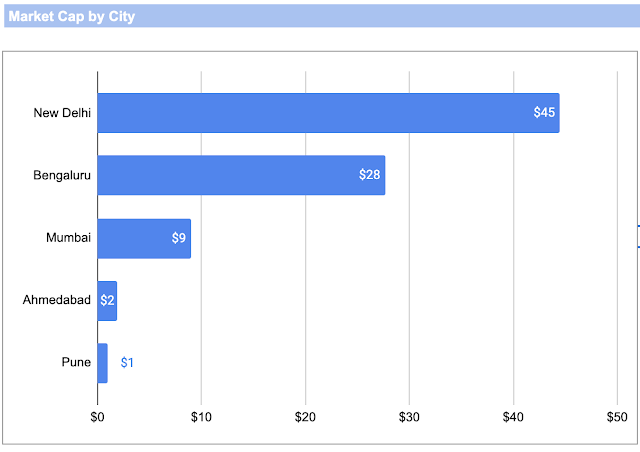 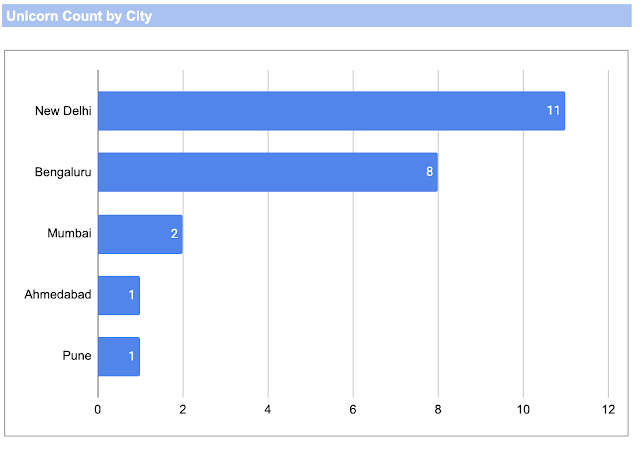 Other markets
The pattern of a primary tech and unicorn and tech cluster repeats itself for the other major markets including Israel (Tel Aviv), Germany (Berlin & Munich more neck-in-neck), UK (London) etc. 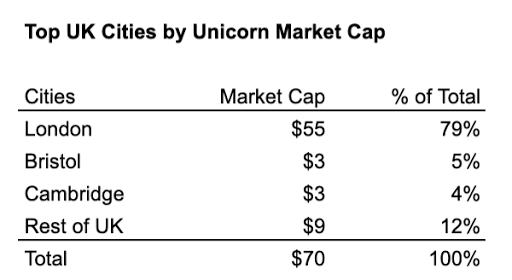 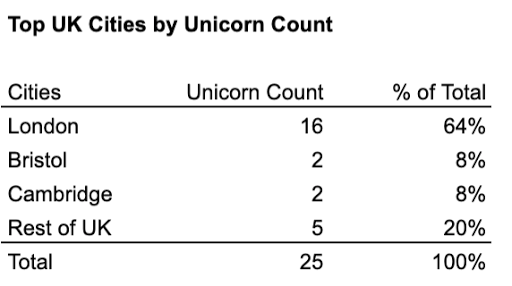 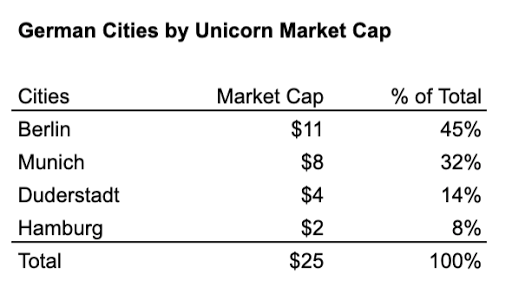 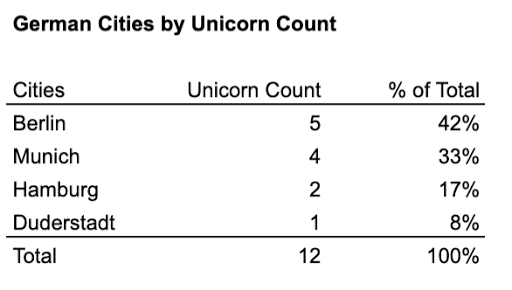 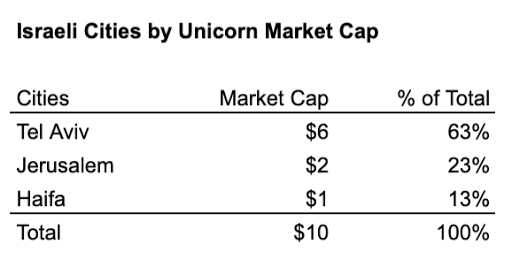 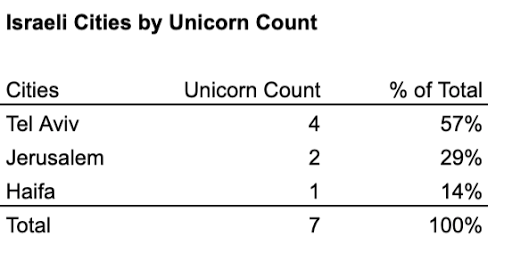 Outlier market cap domination
Startup market cap tends to follow a power law. In some markets, there is very high market cap concentration currently (this will of course change when the companies go public). For example, 58% of Beijing's market cap is in two companies - ByteDance ($140 billion) and Didi ($62 billion). Los Angeles unicorn market cap is largely a function of SpaceX (2/3 of the total!). Silicon Valley market cap is more distributed, perhaps suggested a broader tech ecosystem.

Why are all the unicorn "Remote First" companies since COVID in the Bay Area?
Out of the top 100 private tech unicorns, 11 have perpetual "remote first" or "remote equal" policies. 5 of these were added since COVID. Interestingly, 4 of 5 (Affirm, Brex, Coinbase, Figma) of the unicorns who announced moving to remote-first forever post-COVID are all based in San Francisco, with 1 (Quora) based elsewhere in the Bay Area.
Given that roughly half the unicorns in the USA are based in the Bay Area, you would expect roughly half the unicorns going remote first to be based elsewhere. Instead all of them are in Silicon Valley (roughly a 1/32 chance if this were to happen randomly). Obviously, something else may be afoot.
San Francisco should be going through a golden era and boom. It could be one of the great cities of the world, with a large city budget to support it. Unfortunately, San Francisco's poor governance, high cost of living, lack of housing, failed homeless services, bad budget controls, and other issues were prominent before COVID. With a never-lifted lockdown the city has continued to degrade and this is reflected in both the homeless situation and dropping rent prices as people move out of the city.
The smoke and fires was a recent last straw that drove a set of young unmarried founders I know out of the Bay Area. Anecdotally these founders have largely temporarily relocated to New York and Los Angeles. The main reason people stay in SF is the social network and the serendipity of a cluster and network effect. Due to SIP, if you can not meet people in person there is no impetus to put up with poor living conditions and to stay put. Many have decided to go to cities that are more liveable, with less restrictive conditions.
In parallel, a number of later stage startup CEOs are interested in hiring more outside of the Bay Area, and especially outside of San Francisco. There is an increasing perception that San Francisco based hires are more expensive, self-entitled, and political-activism-at-work oriented (versus core company mission & performance focused) than employees elsewhere. Of course, not all late stage founders share this perspective but an accelerating number do. This impacts early stage companies less with their smaller employee bases, tightly defined missions, and existential need to ship.
If the Bay Area does eventually decrease as a cluster, I am guessing it will be only a partial decline. The network effects and talent base in the Bay Area are incredibly high and if diminished I would guess would drop by 10-20% not 80%. That said, New York, Los Angeles, and to a lessor extent Denver, seem positioned to grow in importance over time if COVID SIP extends indefinitely or SF takes an aggressive tax stance or continues on its governance slide. While I am long term bullish on the Bay Area as an ongoing home for unicorns and major US cluster, it is worth watching how ongoing governance and policies will impact SF. Only time will tell.

MY BOOKYou can order the High Growth Handbook here.

Startup life:
Raising Money
Posted by Elad Gil at 9:23 AM