Takeaways From The 100 Largest Public Companies

As an entrepreneur about to start another company, I thought it would be interesting to take a look at the largest companies by market cap.  What can be learned from them?  Raw data is here.

1. Some takeaways from the top 100 public companies by market capitalization [1]:

A. There Are As Many Tech Consumer Companies As B2B In The Top 100 By Market Cap
The original emphasis for tech was on the B2B side with the pendulum swinging over to consumer in the 1990s through today.

Shockingly, the most recent B2B tech company to crack the top 100 by market cap was Cisco Systems, founded in 1984 - 28 years ago.  The other companies are all from the 1970s or earlier, or were acquired by the remaining survivors.  Will we finally see a B2B renaissance in tech (shout out to Box & Workday)?

C. New markets create outsized value.
The youngest companies to crack the top 100 are consumer Internet companies - most of them from the 1990s when the Internet was an entirely new canvas for entrepreneurs to address.  Similarly, the largest B2B tech companies largely all date from the 1970s, when a new industry was being formed around micro-computers.

What are markets today with outsized new opportunities?

Is it genomics?  3D Printing & DIY?  Mobile Internet?  Something else?  Or is it still core Internet?

D. Distribution And Commerce Are Key Consumer Web Primitives
Of the 5 largest consumer tech companies, 2 are distribution switchboards (Google and Facebook) and 2 are horizontal commerce platforms (Amazon and eBay - which started off more vertically focused but then went horizontal).

This raises two interesting questions:
I. What other companies are primary distribution platforms (Twitter for sure, maybe Pinterest?)  What companies can move from vertical to horizontal commerce platforms (AirBnB and the shared economy?)?  These are areas of outsized value creation.

II.  What are other web primitives beyond commerce and distribution?  E.g. is file sharing / storage a web primitive?  If so, Dropbox will be a multi-$10 billion company.  Are there other fundamental components of the cloud/internet yet to be uncovered?

2. Looking at the 1882 public companies larger then $1 billion in market capitalization[1]:

A. Companies Worth More Than $1 Billion Follow A Power Law
As you can see from the data below there are large drop offs with each step in company size.  Getting past $10 billion in value, and past $50 billion in value seem like large hurdles

(The elbow in the curve seems to be around $45 or $50 billion, although I have not done the math, but if anyone wants to do it the raw data is here). 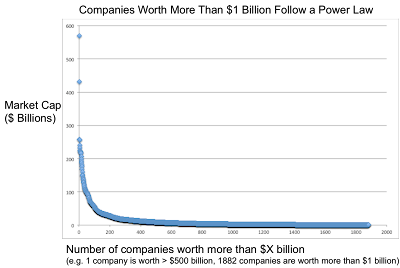 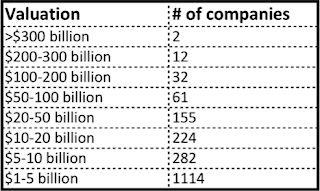 Close up on companies worth $1-5 billion:

NOTES
[1] I pulled this data on October 20th, 2012, so it is already a little out of date due to e.g. earnings calls.
[2] I am not including semi-conductor companies - e.g. Intel, QCOM etc. in this definition of B2B tech.  Also, MSFT is a bit ambiguous as it has both consumer and enterprise revenue.  Similarly, former high fliers that have since been acquired (e.g. Sun) are not reflected

Related Posts:
The Road To $5 Billion Is A Long One
How Can You Tell If Your Market Is a Good One?
What Wave Are You Riding?