Data was taken from CB Insights and a special thank you to Shin Kim, CEO of Eraser for the data and graphs.

Caveat emptor: data from CBI is updated/reconciled over time, so very recent unicorns may not be included yet. However this provides a directional view.... Raw data here. 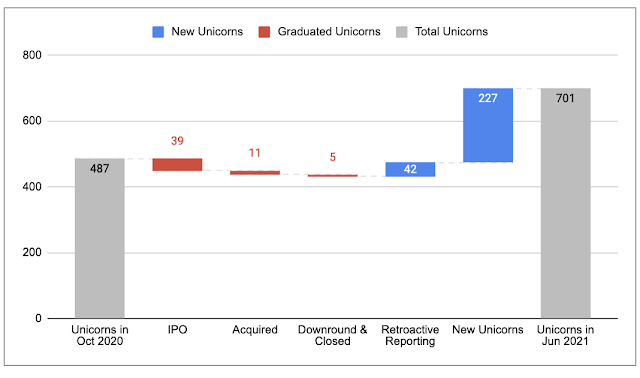 The regional nature of private tech market cap continues to dominate. The big shifts over the last year include:
NEW UNICORNS SINCE OCTOBER 2020 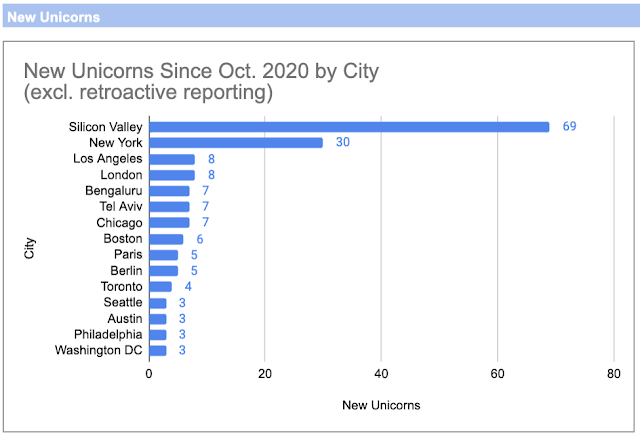 (1) United states: Over 67% of the new unicorns by # are in the USA with 154 total. (out of 227 globally)
There were 69 new unicorns in Silicon Valley, 30 in New York, and 8 in Los Angeles.
This is increasing share for both the USA & Silicon Valley as a % of global tech unicorns, with NY and LA accelerating somewhat. New York anecdotally feels like it has transitioned into a break out cluster of its own.
The pandemic has increased unicorns in the USA at a fast clip. 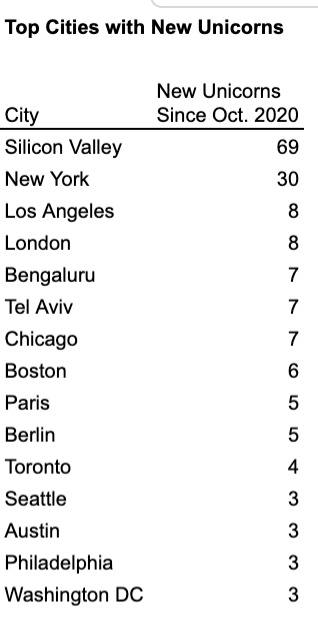 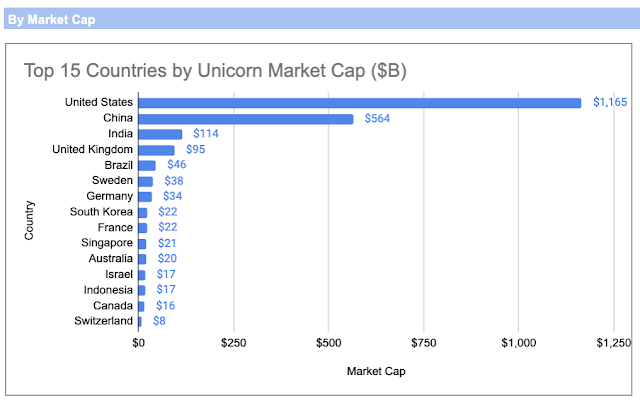 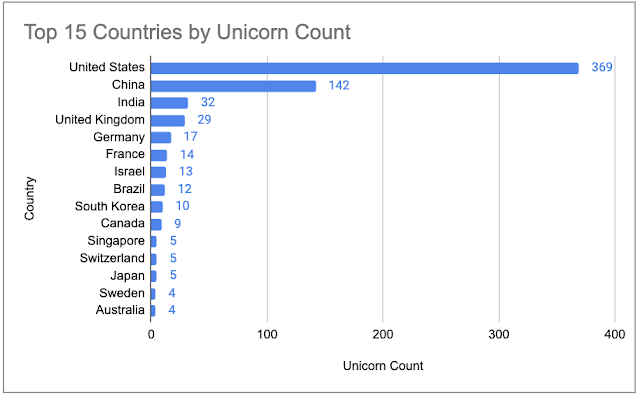 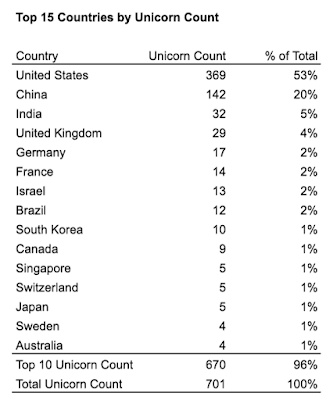 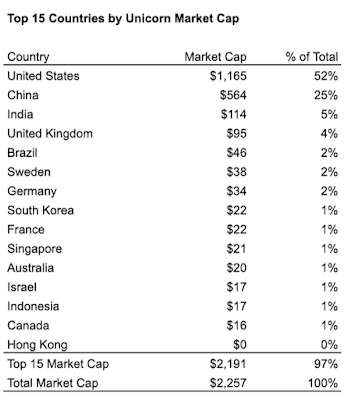 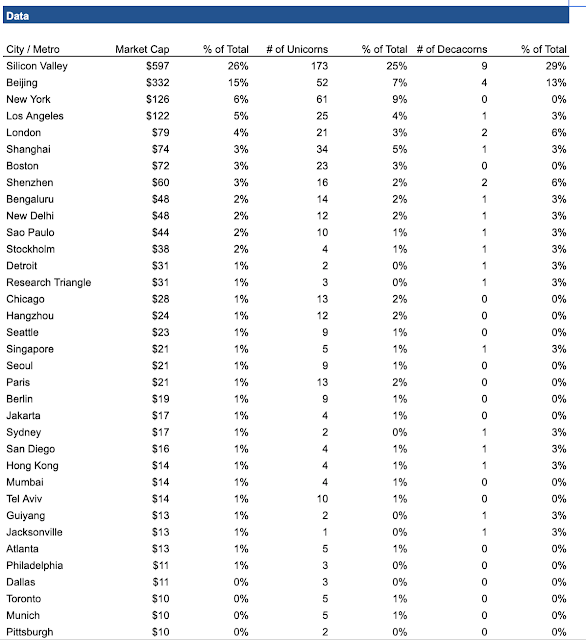 DECACORNS: $10B or larger market caps
Decacorns are largely concentrated in a handful of countries - although a number of decacorns have gone public in e.g. Indonesia and others. 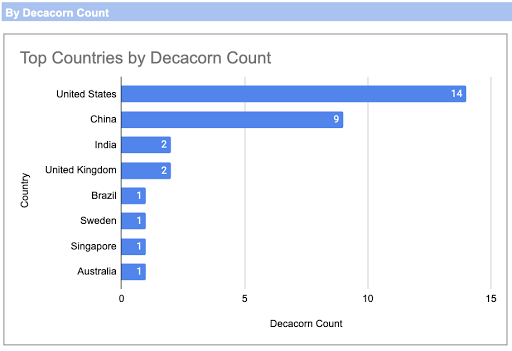 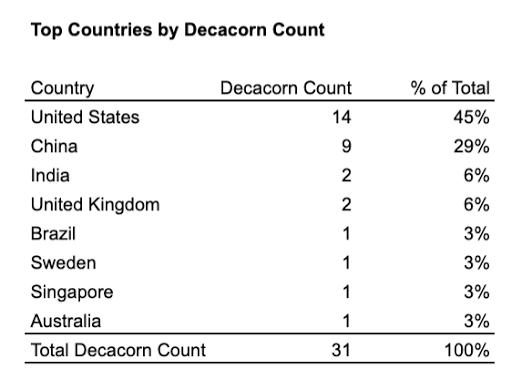 UNICORN REGION AND CITY CONCENTRATION
Within each country, specific cities or regions continue to make up 50% or more of the country unicorn market cap. 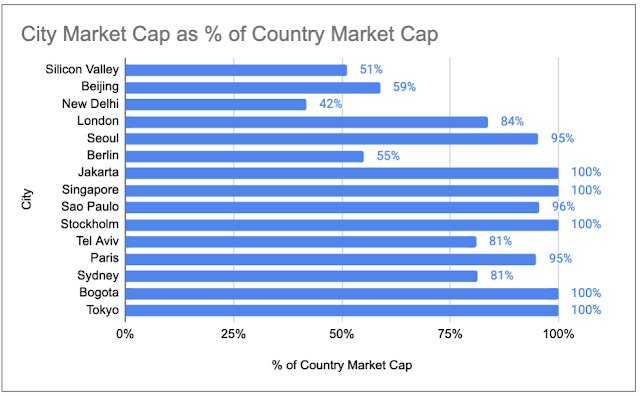 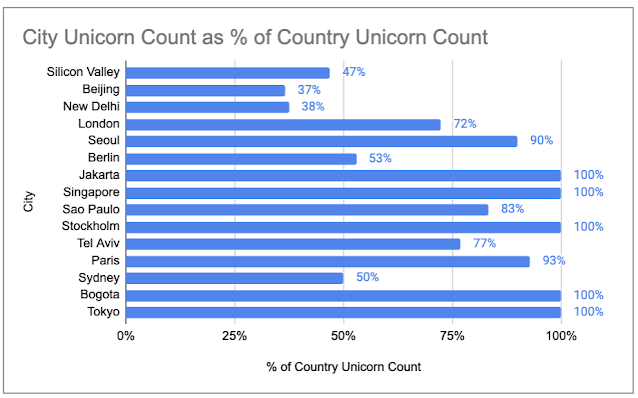 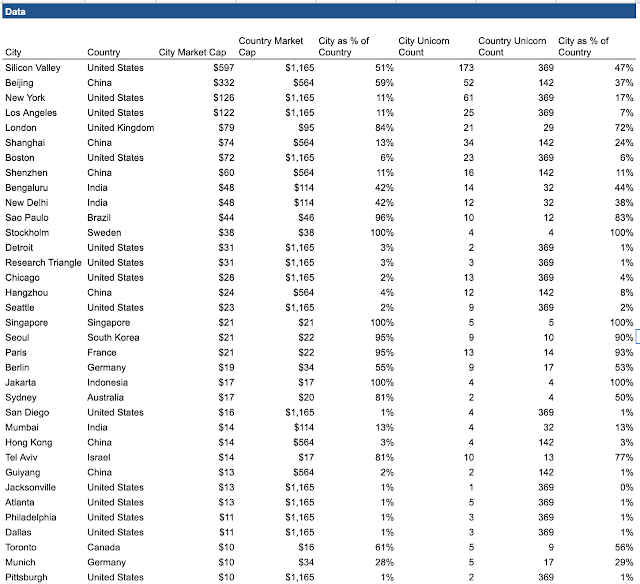 LOTS OF CITIES HAVE 1 UNICORN
While 77 cities around the world have at least 1 unicorn, most are concentrated in 13 cities with 11 or more unicorns. 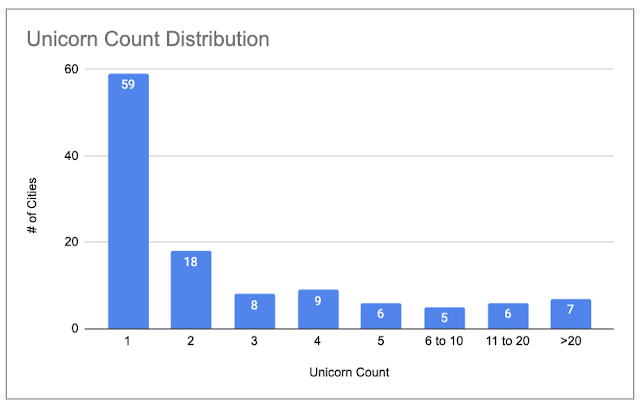 USA CLUSTERS:
"New tech clusters" are not big clusters yet
A lot of great marketing has occurred for Austin and Miami during the pandemic. Austin added 3 unicorns to get to 5 total (below new additions of unicorns in SV, NY, LA, Chicago and Boston and tied with Seattle, DC, Philadelphia). Miami added 1 unicorn to get to a total of 3 (although I am aware of at least one other that just moved there from LA that does not appear counted in the data yet). I am anecdotally bullish on the long term prospects of Miami given the people I know who moved there and the frontier feeling it has. Under discussed as future clusters with strong prospects are Denver (2 new unicorns for a total of 4) & Boulder (1 new unicorn) and Salt Lake City (2 new unicorns for a total of 4). 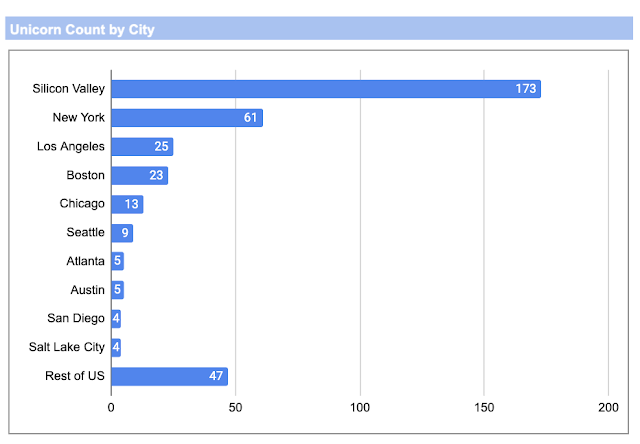 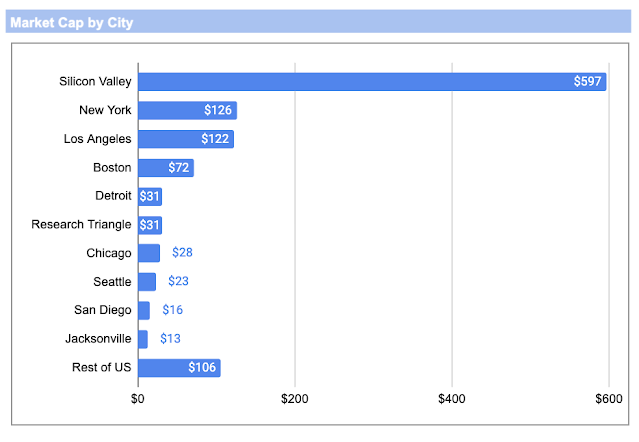 As noted above, Silicon Valley continues to make up 51% of market cap and 47% of total unicorns in the USA. NY has grown its share of unicorns by number relative to other US cities. 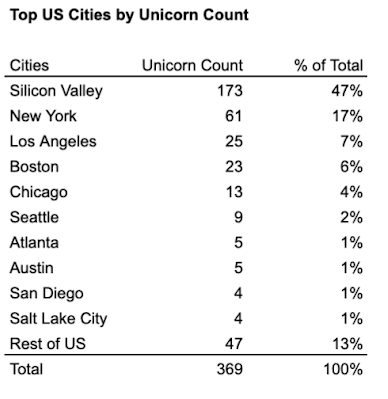 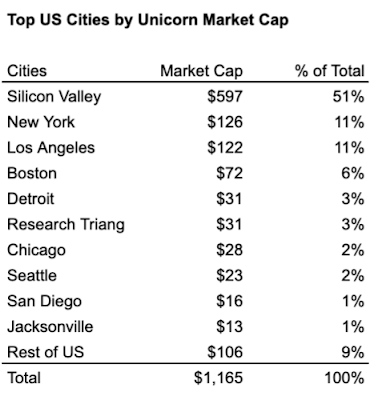 CHINA CLUSTERS
Beijing, Shanghai, and to a lessor extent Shenzen continue to drive unicorn # and market cap in China. 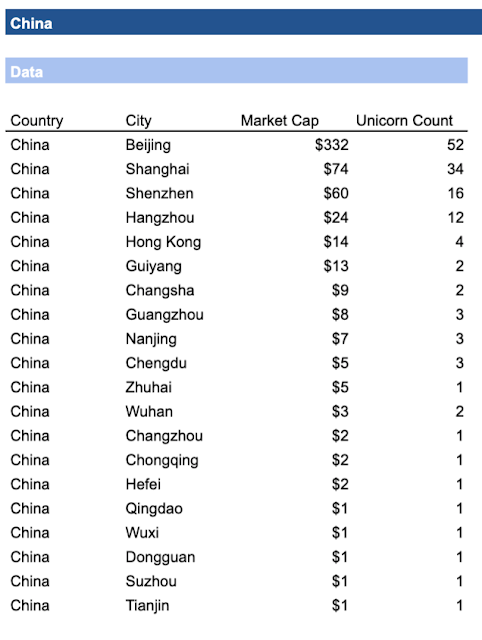 INDIA
In India Bangalore and New Delhi continue to run neck in neck, with Bangalore having 2 more unicorns. 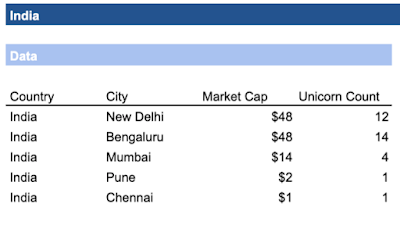 EUROPE (and Israel)
Europe continues to see strong clusters in the UK (where London easily dominates), Germany (ditto for Berlin) and France (ditto for Paris).
UK: 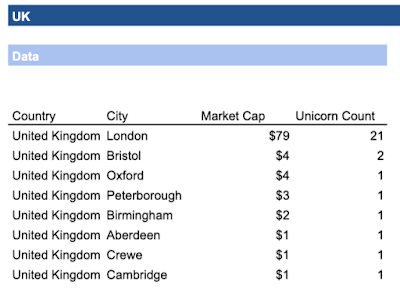 In Israel, Tel Aviv continues to be the main cluster.

UNICORN GRADUATION
In parallel to new unicorn formation, unicorns also "graduate" via an IPO/DL/SPAC, an acquisition, or going out of business. 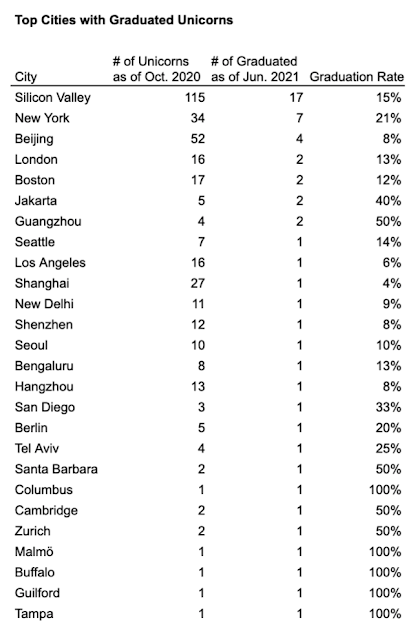 As unicorns graduate the founders and employees of the companies may either fund other new ventures as angels or VCs, or start new companies themselves. It will be exciting to watch more tech ecosystems grow as more unicorns go public.

VELOCITY OF NEW UNICORNS
This data should be caveated as new unicorns from past years are sometimes added by CB Insights (who have done a great public service by aggregating this data to begin with!).
So caveat emptor on over interpreting this data. However, the difference between the USA and China on new tech unicorns over the last 2 years in notable.
Possible interpretation would include:
1. Data fidelity. Is China reporting delayed?
2. Keeping it quiet. Given the unusually high death rate (a Chinese billionaire dies every 40 days) and kidnappings of Chinese billionaires, perhaps there is now a disincentive to announce highly valued financing rounds? 眼不见,心为静。 眼不见心不烦。
3. China is producing fewer tech unicorns. This seems odd given the acceleration seen in tech due to the pandemic, but is possible. 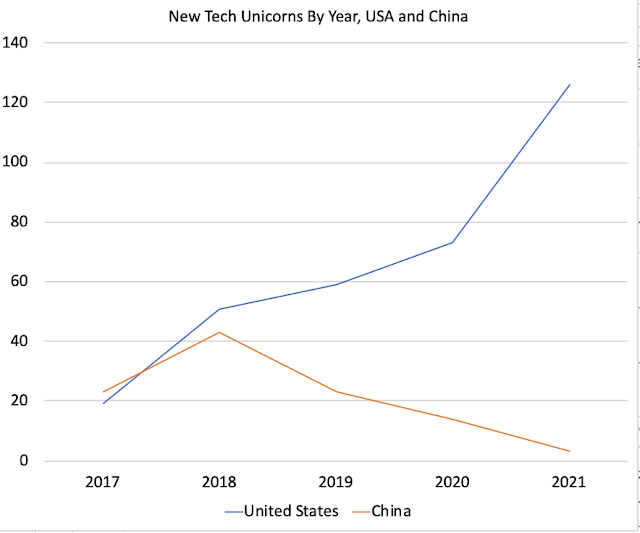 Some of the top countries for rest of world look like this: 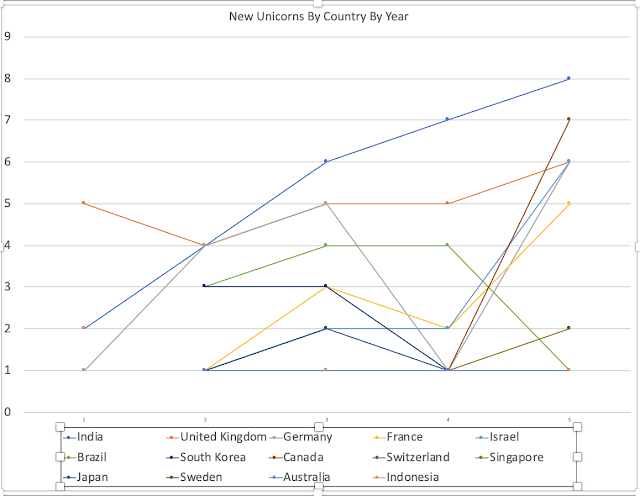 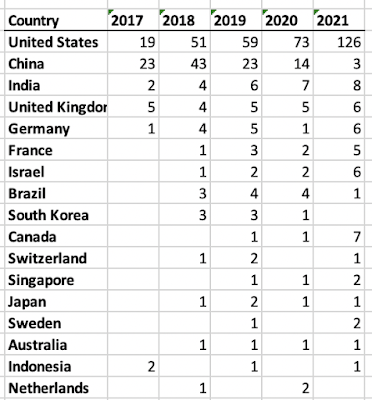 The last year has demonstrated repeatedly the lack of societal preparation for multiple forms of threats to our country and world. Examples of this include issues responding to the COVID pandemic, the cybersecurity ransomware attacks on critical US infrastructure such as our energy systems and food supply, and of course the ongoing issue of climate change[1]. In parallel, new technologies are increasingly being used by antagonistic groups and countries for terror and war. Drone attacks on international oil pipelines and their use in regional conflicts has increased dramatically in the last few years, as have drone related incidents and accidents around airports, sports stadiums, and infrastructure such as power plants.

Just as old incumbent institutions with little to no organizational renewal impacted our ability to respond to COVID, the defense industry has undergone significant consolidation over the last 30 years. There has not been a new defense technology company of any scale to directly challenge these incumbents in many decades (SpaceX and Palantir are obviously sizeable ~20-year old “newer” entrants in adjacent areas). 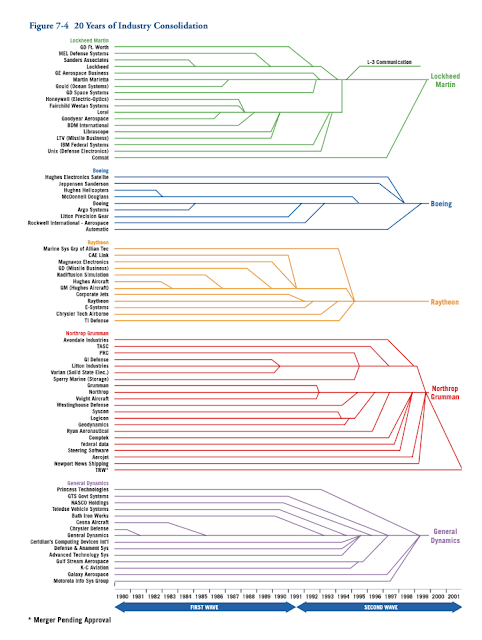 One exciting newer defense technology company that is working on building capabilities around sensor-based awareness and anti-drone activities is Anduril. I am excited to lead their latest round of funding. Anduril will use this funding in part to drive new acquisitions, as well as an ongoing ramp in their team and business. Their main solutions currently include a series of sensor networks, towers, drones, and powerful software that ties it all together - whose potential uses include protecting our troops on base, defending our energy infrastructure, combating wildfires, stopping human traffickers, creating a “virtual border” (a rare bipartisan idea), and fighting drug cartels. Many of these potential uses can directly save lives.

In addition to Anduril, a number of large technology incumbents (such as Salesforce, Microsoft, and Amazon) and leading startups (Applied Intuition, SpaceX, Scale.AI, and others) continue to provide their technologies to enable our defense and intelligence services.

To try to understand this world better, and as part of investing further in Anduril, I interviewed a number of former high level individuals involved with our country’s defense and related policy. A number of people told me they found these interviews interesting, so I am sharing them here[2].

I had a number of takeaways from these conversations. One of my biggest takeaways was the degree to which national defense was truly a bipartisan issue. Democrats and Republicans both believe that technology can be used to protect our families, friends, and neighbors at home as well as members of our military and intelligence communities overseas. Both sides believe that transparency into what is happening around the world is critical, and technologies that increase that transparency are ones we should invest in. And both sides agree that the days of America’s military having the best technology may be coming to a close, and that “business as usual” won’t save us. “I think we need a better ecosystem to work within, Retired Major General Vincent Coglianese told me. “You need to have this nimble relationship with technology.” He, and everyone else I talked to, believe that Anduril is an important player in that shift.

A subset of conversations are excerpted here with permission of the people I interviewed.

[1] I am actively looking to invest in Climate Change related companies, with an emphasis on software and data analytics related tooling, or carbon capture technologies.

[2] These discussions have been edited down for clarity and conciseness.