Put Your Investors To Work For You

So you found the right mix of angels for your round, successful navigated around venture economics, and all the other issues associated with fund raising.

At this point, many entrepreneurs don't take proper advantage of all the value added investors they spent so much time and trouble courting.  I.e. what is the point of having one of the super angels in your round if you don't make use of her/his help and expertise?

At Mixer Labs (a company I started that was acquired by Twitter in December), I was always pleasantly surprised by how much value meeting with our various investors brought.  Just as you have an engineering team or a UX team, you should think of your investors as your investment team and find ways for them to work for you.  Below are some tips for making the most of your investment team:

Our investors were extremely helpful throughout our early days as a company.  Even then, I don't think we utilized them as effectively as we could have.   Hopefully the tips above will allow you to make the most of your investment team.
Any other ideas on how to make the best use of your investment team?  Please add your thoughts in the comments section.
You can follow me on Twitter here.
Posted by Elad Gil at 1:52 PM

Are You An Alcoholic Yet? Or, The Great Startup Rollercoaster

This post has appeared as a guest blog on FounderDating, which brings together entrepreneurs with different skill sets to start innovative new companies.

Startups are by their nature extremely stressful.  At a large company, the company itself has momentum.  With a few exceptions, if one person (or team of people) were to suddenly disappear, the company will continue to coast for (potentially) multiple years before the effects may become evident

Thought experiment - imagine if the (multi hundred person (?)) Microsoft Office product and engineering team suddenly disappeared (kidnapped by aliens?).  The sales team could keep pushing the existing product for many years without customers noticing.  Microsoft could still generate ridiculous amounts of cash off of the product, with no one actually working on it.

In contrast, at a startup as the entrepreneur if you stop pushing, everything immediately comes to a halt.

There are times when you need to push much harder then others to get over a hump that reminds me of activation energy from chemistry.   Early on these events can be exhilarating, but with time some of these high anxiety / workload moments can really wear you out. They may include things like: 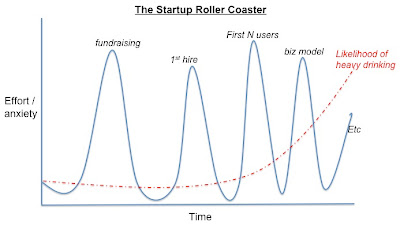 As a friend of mine put it, if a year into your startup you are not an alcoholic, you must be doing something wrong.
So how to deal with all the stress?  At Mixer Labs (a company I started that was acquired recently by Twitter) I tried to do the following:
Startups are stressful but very rewarding.  If you don't find ways to cope with the stress you will burn out or blow up and the work environment will deteriorate rapidly.
What do you think?  Any ideas for how to decompress or deal with startup stress besides alcoholism?  Let me know in the comments section.
You can follow me on Twitter here.
Posted by Elad Gil at 3:47 PM

The Fundingpocalypse: Your Mom Wants To Angel Invest!

You know how your mom or great uncle with the car dealership really wanted to buy Yahoo! stock in 2000 so they could "get in on this thing called the Internet all the kids are talking about"?  You know how that marked the height of a funding bubble?

I spoke over the weekend with an angel I know.  He has been getting random phone calls from people who "want to learn to angel invest".  These are people who have never started a company or worked at a startup (well, maybe Google when it was a few thousand people).  They seem to have no real interest in company formation other then they know a bunch of people talking about how great it is to be an angel.

I think it is a clear sign of the fundingpocalypse.  Yes folks, there is an early stage funding frenzy right now.

In a prior post, I discuss how Party Rounds differ from Led Rounds, and how to raise a Party Round.  In this post I explain what is driving Party Rounds and discuss their implications for entrepreneurs, angels, and VCs.

In the last 12 months two big shifts have happened:

As I explain below, this shift is one with implications to angels, VCs, and entrepreneurs.  This shift has been in part driven by Y Combinator, AngelList, the rise of super angels and the changing economy/lack of good investment opportunities.
Why Are Party Rounds Suddenly So Common?
Two years ago, it was rare to have an entrepreneur set his or her own terms.  The following things have changed:
The net takeaway is that there is not just more money chasing the same deals, but rather, there is more money that (a) won't lead rounds or ask for a lead or board seat and (b) in some cases (e.g. new angels flooding in) doesn't understand angel economics in a very sophisticated way (i.e. most of these people will lose money in the next few years).

Implications for Angels:  Net negative (but they don't realize it yet)
I leave you with this quote from Keith Rabois, which has interesting implications for the above:

"The companies I have traditionally seen do best over the long term had lead investors for their seed rounds" - Keith Rabois
What do you think?
a) What other trends are feeding all the Party Rounds?
b) Is this a good or bad thing for entrepreneurs, angels and VCs?

Party Rounds: How To Get a High Valuation For Your Seed Startup

A major shift has happened in the last year - entrepreneurs have gone from led seed rounds to "Party Rounds".  This shift has non-trivial implications for the venture industry which I will explain in another blog post (in which I will also explain what is causing more and more party rounds to occur).
This blog is focused on:
(a) The difference between a Led Round and a Party Round
(b) How you raise a Party Round
Led Rounds (Old Model) vs Party Rounds (New Model)
How to Raise a Party Round and Get a Better Valuation
In the not-so-distant past, there were a handful of major angels or funds who would lead rounds.  An entrepreneur would have to negotiate terms such as valuation with this small set of potential leads.  Once a lead fell into place, other investors would follow on into the deal.  The small number of potential leads meant that:
Today, it is increasingly typical that the entrepreneur raises a round without a lead investor.  Furthermore, the entrepreneur can get much better terms (e.g. a much higher valuation) in a Party Round as follows:
I will discuss why Party Round have emerged, as well as the pluses and minuses of these rounds in another post.
Thoughts?  Do you think Party Rounds are good or bad for the entrepreneur?  For the investors?  For the tech community?
You can follow me on Twitter here.
Posted by Elad Gil at 10:54 AM