Geo-Location APIs: What Are The Differences?

One topic from the RealTime CrunchUp hosted by TechCrunch (on which I was a panelist representing the Mixer Labs/TownMe GeoAPI.com) was the various location-focused APIs that have launched recently. Given the large spate of recent "Location API" announcements and roll-outs, and how different these APIs all are from each other, I thought it would be useful to break out the major components of APIs that have geo-information and to compare their uses. This helps clarify which API to use when, as well as what APIs are live versus longer term roadmaps.

Goals of a Location API

The purpose of a fully formed Location API is to allow developers to build a robust set of location services using the API as the data source and data store. Many recent Location API announcements are really applications releasing incomplete databases of crowd sourced business listings generated by their users rather than the broader offerings defined below:

The 5 Core Components of Location Based APIs

Much of the confusion around Location APIs is that although all of the APIs that have launched recently have different aspects of location involved, they all differ pretty dramatically in the feature set offered and the types of information that can be accessed for each.

The core components are:

In addition to the 5 core Location API components listed above, there are two additional items provided by companies which they call “Location APIs” but which don’t really enable developers to build fully robust geo services in their own right:

I have tried to compile a view of what is available with each service as mapped against the 7 components above. A check mark indicates it is fully live, a dash indicates there is some data but it is not yet comprehensive.

Disclaimer: for some of these services information is scattered or not always easy to find. If there are errors in e.g. the table below, please email me and I will correct it. 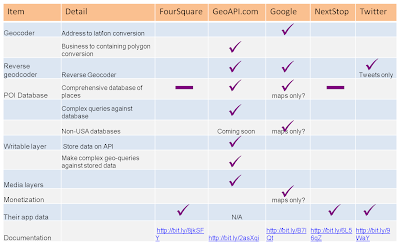 (Aside: SimpleGeo, another location API, is not covered as the product is currently in “private beta”. No documentation, or demo keys are live. and no developers I have spoken with have been given a key. So it is unclear which parts of the service are live versus forward looking roadmap.)